Someone wrote to me, inside a Christmas card, "I know 2012 hasn't been the greatest year for you but it seems like you had a lot of fun along the way." And I think that sums up the year perfectly.

I feel like it was a year of strength and progress. It was a steady year where I was able to let the foundation of me settle more, without too many earthquakes to shake up the progress. Even the bleak parts don't seem so bad when the whole year gets put into perspective. 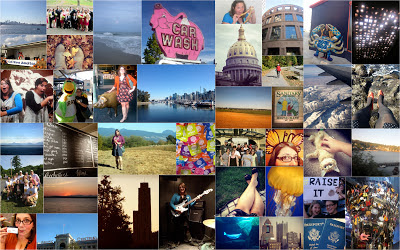 So, here is what I did this year:
So 2012 has a few more days left. And my wish for everyone, including myself, is to make the best that they can be. And look forward to 2013, hope for magic, and discover reasons to smile.
Posted by BrassyLibrarian at 2:15 PM