I am many things: A dutiful daughter, a compassionate sister, a woman who likes to laugh, a girl who is scared, a fierceness that will keep working until she gets what she wants, a caring friend who tries to give back the love she's gotten. I'm a 30 year-old professional who probably thinks about work a little more than she should, a person who can barely stay away when watching a movie alone, a girl who appreciates a bright lipstick, someone who when left to her own cooking devices is perfectly content to boil a lot of rice and sauté the heck out of vegetables. 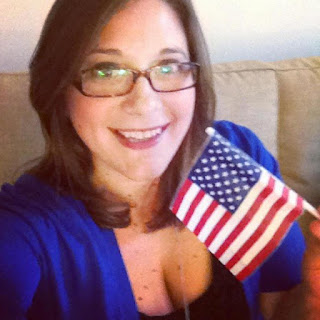 This is me. I'm also the girl who will bring American flags to an Olympic party. And wave them around like she just doesn't care.

And despite being a librarian and despite wearing glasses, I am not a hipster. Hipster Librarians are a growing breed, but I'm not really one of them. I'm geeky, sure. But I don't shop vintage and though I support my local coffee shops, I drink Starbucks a lot. I like men with beards, but I'm not your skinny waif of a girl and I not even a vegetarian, let alone a vegan.

But if I could trade my OPAC, get a pair of thicker glasses, and start to collect vintage photos and open an open an Etsy shop, and be a hipster chick? I'd be:

Lena Durham
She's liberal arts educated and has a hit show on HBO. She's not always happy with her body, but she's  strong enough to show if off. Plus, I hear she's dating some guy for Fun. And come on! There new video has the band dressed up as Civil War soldiers. Seems like a solid hipster couple to me. We could go to gallery opens, complain about the lack of beer being served, then go to a local bar and complain that everything they have on tap isn't as good as they stuff we make on our own. I don't want to be her Girls character, I just want to write for Girls and have a collection of designer Mary Janes.

Zooey Deschanel
Of course. She's the IT girl of Hipster girl. She's quirky and cute. Her hair is on a bad day is probably better than my hair on its best of days. She was once married to Ben Gibbard and I imagine that they probably spent part of Sunday mornings drinking fresh squeezed orange juice out ouf mason jars while they tried to complete they NY Times Crossword puzzle. She's said that she can't really imagine herself having children because she loves working too much. She has her own website filled with girly pieces. She even has people making fun of her on SNL, meaning she could probably pop in and do a Weekend Update with Seth anytime she wants. Now, I might not be able to have a hit show on Fox, but if I could ever write a piece and get it published on HelloGiggles I *might* consider myself made.

Michelle Williams
Okay, so maybe it's hard to call anyone who was a star of Dawson's Creek a hipster. But hipster wasn't really part of the world's lexicon on the late 1990s-early 2000s. And plus, I don't think she really started to grow hipster roots until she stared to date Heath Ledger. Now her hair is shorter than I could dream of wearing and she has a collection of cute, printed dresses with ruffles and bows. She wears headbands and dates Jason Segal. And since Amy Poehler and Will Arnett aren't together anymore, I really feel like this is the only celebrity couple I can get behind. This girl is going to win an Oscar one day, let's all get behind that.

I'm not going to be a hipster girl anytime soon. And honestly, that's for the best. I'll just be me.

Posted by BrassyLibrarian at 12:00 AM