The Pirates are about to have their first winning season since 1992. I was 11 in 1992. I only vaguely remember that season. But I do remember Barry Bonds, and Three Rivers Stadium. I remember making a fake bet with a family friend who lived in Atlanta. I work black & gold to school, I'm sure of it. And though for certain that they would do it again. And soon. Because I was young and naïve.

But they are about to do it again. And the city is on fire with pride. And quite frankly, it's refreshing to have it be September, on the cusp of the true Steeler season, and hear very little people talk about football.

I've written about my relationship with baseball before. But since I was born and raised in this city that supports its sport teams through thick and thin, I thought another type of list was due.

Here why I love the Pittsburgh Pirates:


Because we have fireworks.﻿ 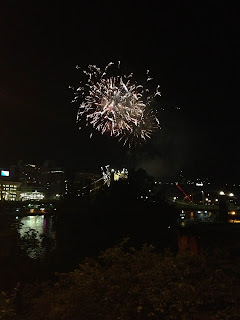 Not after every game. But since Pittsburgh LOVES Fireworks. After many games.
Because I'm in the Lady Bucs Club (Thanks to a Best Friend)﻿ 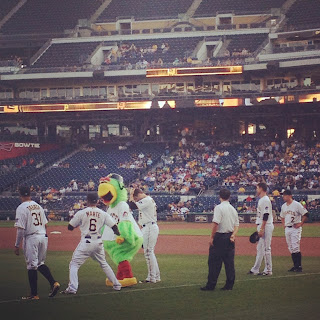 And this is how close we sit!

﻿
Because take a look at our mascot!﻿ 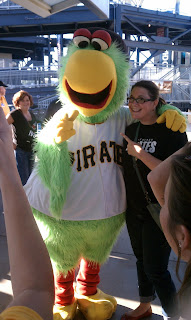 He's a parrot! He's sometimes raunchy! And I've met him!
Because I actually attend games.  ﻿
﻿ 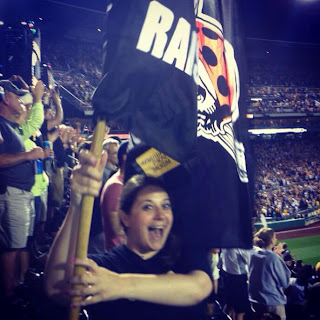 And then get to waive this awesome Jolly Roger flag made by my best friend.
Because you can spin a wheel and win prizes! 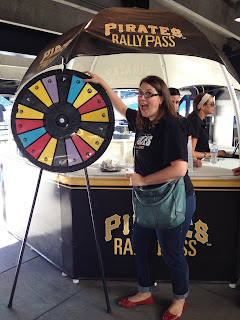 Even though I never won the Pirate Parrot soap dispenser.
Because you can make signs and get on TV. 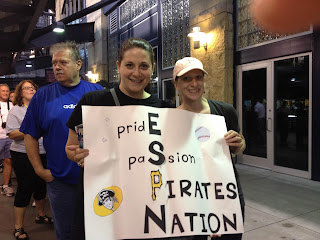 Granted, we never made it to ESPN. But we did make it to ROOT.
Because this is the view from PNC. 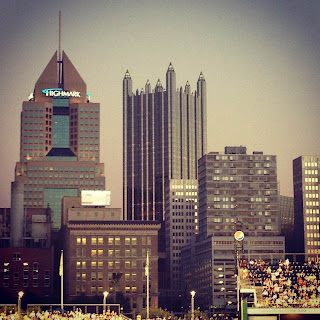 Seriously. How can you not love everything about Pittsburgh?!
So, say it with me now...Let's Go Bucs!  And tell me, dear readers, what do you love most about those Buccos? ﻿
Posted by BrassyLibrarian at 12:00 PM