The holiday dread that I was experiencing earlier this week is settling. I'm sure I will have a few flair ups on the road between now and New Year's Eve. But maybe it won't be so bad. And I've decided, in an effort to both find the joy in the season, and to find some holiday fuel for this blog. That I'm going to write about the things I discover this holiday season that make me happy. Normally I would just write one list of such items and call it a day. But I don't think I know all of the things that I love about the holidays. Maybe I'll find a few new things and rediscover others that I just take for granted. 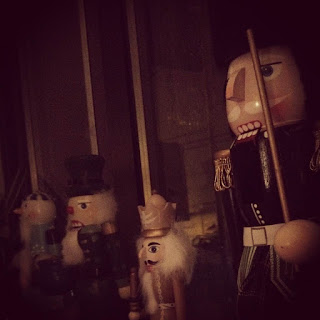 Just a peek at the collection that is now sitting on my living room window's ledge.

This afternoon I was over at my parent's house and had the opportunity to start to pick through the family's LARGE Christmas boxes. My mom is a teacher who loves cute little things and throughout the years she's has acquired a lot of holiday decorations. But at the bottom of the decoration bin was a tupperware bin filled with my Nutcracker collection.

I've been collecting Nutcrackers since I was in the second grade. See for a number of years in my youth, ballet was a huge part of my life. I danced at the Pittsburgh Ballet Theater until my little brother was born when I was 10. And for three years, I got to perform in The Nutcracker. My first year, in second grade, I was technically too young to join the cast but was asked to audition specifically. That year I was barely 7 but I got to perform on stage at the Benedum and even boarded a bus twice for trips that took the ballet on the road. I remember wishfully wanting the tall, blue Nutcracker on display inside the ballet studios (they had assorted ballet items for sale) and how my friends and I would gawk at the glass case during rehearsal breaks. Remember, we were in grade school and went to PBT for twice weekly dance classes and then spent 6+ hours in rehearsals on Saturday for the Nutcracker  When dress rehearsals and fittings came along, I missed school and had early dismissals for performances. Then on Christmas Day, I opened a thin box to find the same Nutcracker that had disappeared from the case a few weeks before (and left all of us girls heartbroken and curious). I still have him, and he's in the window right now, the only Nutcracker without a beard because I loved him so much every Christmas that it fell off sometime in the late '90s and was never glued back on.

Now I have Nutcracker nesting dolls, Leprechaun Nutcrackers, and even one that looks like Father Time. And for the first time, they are on display in my own little corner of the world. I just hope the cat doesn't ruin them.

And as for the Pittsburgh version of the Nutcracker that PBT puts on now? I am not a fan. It lacks a orchestra! And is hardly the wonderful blending of Company dancers and students it once was. Since they changed the focus of The Nutcracker, I've found other Pittsburgh Holiday Traditions to enjoy. But I still love finding a new Nutcracker to add to my own collection of memories each year.

What about you readers, do you collect anything that is significant during the holiday season?
Posted by BrassyLibrarian at 2:04 PM