I'm not an athletic girl. The rest of my family can all claim basketball and football accomplishments and had trophies lining the den growing up. But those were not my genes. I was given other talents and never minded one bit that my athletic career was over after a 2 year run of playing basketball in middle school.

But boy, do I love the Olympics.

I have fond memories of watching them growing up. Something to look forward to every four years, it would give excitement to summer nights. We didn't have cable for much of the parts of childhood that I remember, and I often missed some of the coolest shows, but I never had to worry that I would miss the Olympics.  I have vague memories of the competition before professionals were allowed to participate. And I always thought how wonderful it would be to swing my body around on the gymnastic bars.

But really, my love affair started to bloom in 1996. Atlanta was hosting the Olympics. And I was attending. Now, before you start to think that my family was one that had a lot of money and I was a privileged little girl, let me assure you I wasn't. When I said we didn't have cable for chunks of my childhood? It wasn't because my parents were worried that television was going to rot their children's brains. It was often because my parents knew they couldn't afford it.

We scrimped and saved for that vacation for years. From the moment the Olympic committee announced that an American city would be hosting the event until the day we left.  We didn't fly to the southern city, we drove two days in a van without air conditioning. My mom packed a cooler of sandwiches and drinks and cold salads and snacks so we wouldn't have to buy food on the road. And we stayed with my dad's best friend from college who then lived in the city's suburbs. I was 14, had just finished high school and liked my friends more than family like any normal teenager, but I put all of that aside to enjoy the best vacation my parents had ever dreamed of giving us. 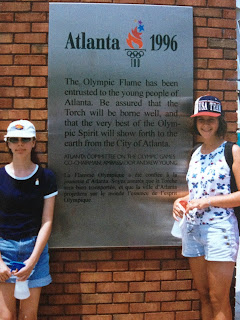 We saw Volleyball as a whole family and cheered with fans from the Netherlands. My Dad and his friend took my brothers to see Baseball. And then they took myself and my dad's friend's daughters to see Track & Field. We played in the water fountains in the Centennial Olympic Park. We saw free concerts at night and ate lunch in the CNN tower one hot afternoon. We visited Nike Town and I dreamed of taking the Coca-Cola tour (too busy, it might have been too expensive). We bonded with Pittsburgh bond of finding Steelers fans all over. And made friends with Mongolian wrestlers on the subway. 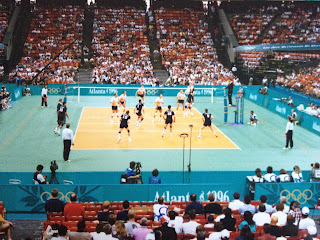 Volleyball, Atlanta 1996. I wish I could remember who is playing in these photos.

And then, on one of our final nights in Atlanta, the adults took the subway into the center of the action. They went out to see a concert, and have some adult fun while the children were left behind to watch the primetime events live on television. And then, when the younger children had gone to bed, to pop in a rented copy of Braveheart. We fell asleep before the adults got home and woke up to devastating of a news: a bomb had gone off in Centennial Park.

My parents and their friends were in fact, on the last train out of the park before the bomb went off. They had been in the exact part of Centennial Park where the bomb went off. We all had been there multiple times all week.  But they missed the explosion by a few minutes. Already being shuttled out of the city and back home to their children as the bomb let loose, before two people died and over a hundred injured, before Richard Jewel became a target.

Looking back, I can appreciate the efforts the adults took to underplay the situation. I never felt scared. They never let us know just how close they came to being in danger. They never made us feel that we weren't safe. They were matter-of-fact about the incident over breakfast, let us watch the news. Then told us to get dressed; we had tickets to see basketball that day.

We waited in the pouring rain outside of the Georgia Dome for an hour while the bomb squads used dogs to sniff out bombs in the building. We were cold and hungry. And I remember my mom ordering us hot chocolate once we got inside to warm up. We had seats pretty high up, and of course we didn't watch the American team. But rhythmic gymnastics practice was going on at the same time and my parents let us sneak to the border to watch both.

In 1996 it was cool to like the Olympics. It was patriotic before patriotism was used as a political maneuver. I could wear red, white and blue as a teenager and not be considered a dork. I was introduced to collecting Olympic pins and my brothers got to wear things with Izzy on it. 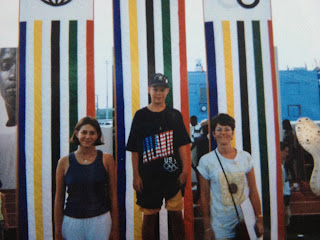 That's my little brother winning the gold, me winning silver, and my mom winning bronze.

Really, what isn't to love when your family comes together for the trip of a lifetime. What isn't to love about sports becoming a community event and the citizens of countries celebrating together.

Posted by BrassyLibrarian at 8:16 PM