I think as adults we all sort of miss the Christmases of our childhoods. Waiting for Santa, not being able to sleep on Christmas Eve, the large pile of presents under the tree. And for me, one of the best parts of Christmas is the nostalgia and traditions.

So for nostalgia's sake, I'm going to relive some of my favorite Christmas gifts throughout the years. No reason to worry be worried about what we don't have, or what we never had, but rather remember the sweet moments when someone knew you well enough...whether that person was a parent, a friend or Santa. 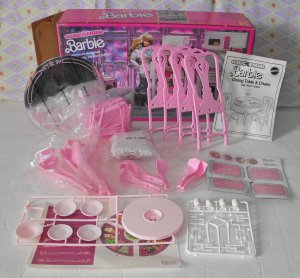 Barbie Dining Room Table Set
I will gladly admit that I played with Barbies way later than it was fashionable for a young girl to be playing with Barbies. I didn't give them up until the end of 7th grade and up until that point my gradeschool best friend and I loved to make elaborate homes for Barbie and carry out bizarre family plots where mom and dad dated other people and the grandmother kidnapped the children. I actually think going to Catholic school and having our families be pretty drama-free made our imaginations more vivid than they needed to be. So scoring this awesome Barbie dining room set (probably in the 4th grade) was a pretty amazing gift. The table actually had a lady susan! And in the 4th grade I thought lazy susans were the epitome of kitchen chic. It's probably safe to say that I pretty much loved getting anything Barbie-related at Christmastime but this dining room set was top notch.

Board Games
Growing up there were two things you could count on getting as a Christmas gift in my house: pajamas and board games. Each year myself and my two brothers would each get our own board game and the family would be expected to play each game at least once over the Christmas Break. We had the classics: Battleship, CandyLand, Operation, Monopoly, etc. But then we also had far more trendy and kitchy too: Teenage Mutant Ninja Turtles, New Kids on the Block, Gooey Louie. They key to board games for Christmas was never asking for a specific one and being surprised when you unwrapped yours. Pretty sure this tradition is why I value playing board games with friends and significant others as an adult.

Caboodle
If you were a girl in the early 90s, the Caboodle was essential to your life. It was with a Caboodle that you could organize all of your growing girly hopes and dreams, store your lip glosses, hide your secret notes and generally feel more grown-up than you were. And when my parents wrapped one for under my tree, I was in heaven. The one pictured is the exact one I got. And I was thrilled. I twas bigger than the Caboodles my friends had; more space for very important pre-teen items! I could take it to ballet rehearsal! Oh, Caboodle you made even a geeky girl who loved books and dolls feel cool. Also, for those interested Caboodles still exist.

Leather Jacket
I was a high school student in the mid to late-90s. And in those years, leather jackets were a fashion statement. I can't remember if this was just something at my school, if it was girls as well as boys, or if this was an all-around national trend. But my family didn't have a lot of money in those days and I actually wasn't even sure I wanted a leather jacket. So when I opened one up on Christmas morning circa 1996, I was stunned. It was awesome. And boxy like this one and stopped at my hips. I wore it with a plaid scarf and a leather purse and it's nothing I would even imagine wearing now. But back then? I loved it.

And of course there are many more gifts from childhood that I fondly remember: a bike, a stereo, stirrup pants. But perhaps they'll make a future list. For the rest of this Christmas I'm just going to count my blessings and try to think about love. And perhaps, just perhaps, I'll find that wallet I've been wanting under my tree on Sunday.

So dear readers, what was one of your favorite Christmas gifts from your younger years? Share with us in the comments.


Posted by BrassyLibrarian at 11:51 PM