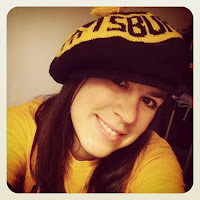 Internet, this is Brenna. She's the girl sitting next to you in a bar yelling the loudest when the Pens score a goal or when Big Ben gets sacked. She crushes hard on professional sports players but don't make the mistake in thinking that this girl only cares about the hottest quarterback (hint: it's not Tom Brady). Her sports knowledge runs deep and chances are, she'll crush you in trivia.


Newton Observatory, Allegheny College, Meadville, PA
A lesser photographed spot on campus
We were on the dance team together, sorority girls together (different sororities once again. Do none of my Kappa sisters blog?), quit dance team together and got more than tipsy at the SportsGarden together.  And then we moved here together:

Corinth, Greece
Though we did not live in ruins, but in a tiny apartment that overlooked Agrocorinth. But that, dear readers, is an entirely separate story.

And now Brenna bleeds black and gold finding her way through New York City, all while trying to find her own version of Ted Mosby.  If you haven't caught on, she even named her blog after the forever romantic character.

Q1: What should readers know about you?
A: I believe every woman should own a pair of red high heels. I could eat Thai food every single meal. I think Kelly Clarkson sings break up songs better than anyone on the planet. I wish Chuck Bass and Schmidt were real people. And nothing makes me happier than a good bottle of red wine and a Penguins win.

Q2: Why do you blog?
A: I've always processed my feelings best through writing. I kept a journal up through most of college and kept my sanity during the most awful moments of going through a divorice by writing emails to parties involved that (mostly) went unsent. I started my latest blog when I was feeling kind of crappy about being single, and thought I could at least entertain some readers by working through my insecurities and stories about being single in Manhattan.

Q3: Since you write a dating blog, and this is a librarian's blog, which fictional character would you most like to date? Why?
A: Peeta Mellark...if he were at least 10 years older. He's tough and sweet and caring and intelligent. He's also unabashedly romantic. Wouldn't you like to someone to declare his love for you to an entire nation, even if it was right before you were suppose to kill each other? Also, he only has eyes for Katniss...

And so, Brenna's Goodbye Letter to Love Lost But Never Really Had:

They say timing is everything, and I used to think that was silly. You can control timing, somewhat. You can wait until the timing is better, or you can fix the things that make the timing bad. Very few things are outside the realm of your control, at least once you decide to do something about them.

I don't think I believe that anymore.

What I believe is now that had we met a year or two later, we'd be dating. We wouldn't have had the people or circumstances around us that we did then. We'd hit it off at a bar - we'd probably argue about sports - and you'd shyly ask me for my number. You'd wait the appropriate amount of days - I bet you're a wait three days kind of guy - and then ask me out, and our first date would be something like pizza or wings or a baseball game. I'd spend the night making of Tom Brady's hair; you'd remind me the Steelers lost to Tim Tebow. You'd walk me to the subway, or put me in a cab, and you'd kiss me goodnight, and I'd have butterflies the entire way home.

As fate would have it, we didn't meet last weekend. We met a couple of years ago, surrounded by messed up people in messed up situations. Neither of us really had it all together, and so we kept dancing around each other, making mistakes and bad decisions, drunken phone calls and text messages, and existing on the edge of something but never really diving in. And before we knew it, it had been two years, and it was old, and something had to to give.

I didn't want to have to do this. I held out hope for so long that you would just get it together and stop being stupid and realize that the spark we have doesn't happen every day. I wish you'd realized that it wasn't too late. I wish I could have told you I never stopped thinking you were genuinely a good person deep down, even though all my friends did. I wish you'd realized that I wasn't going to wait around forever and had done something about it.

So when you texted me last week, I didn't reply and I hit delete. I can't do this anymore. It's been going on for far too long. I've spent too many nights crying over you, and you don't deserve that from me. I can't go halfway with you. I've tried to stay friends and push my feelings to the side, but I've realized I just can't function like that, and so I have to cut you off completely. And that makes me really sad.

Whether you realize it or not, you were instrumental in getting me through the most awful period of my life. You were the distraction I needed when the world was crumbling around me. You were someone I looked forward to seeing, and your chats kept me company during late, lonely nights. Regardless of what we happened next, I will always be grateful to you for that.

I'm going to miss you like crazy. We haven't talked that much lately, but when we did, I smiled. The conversation flowed easily. There were no awkward silences. I'm going to miss your hugs, and your eyes, and the few times I got to kiss you, because dammit, they were good kisses. I'm going to miss arguing with you most, because that's when the sparks really flew, even though I recognize that no healthy relationship has ever been built from two people who like to argue with each other.

I wish the circumstances and timing had been different. I wish we could have existed in a vacuum without anyone else interfering. I wish we'd had a little more time living in the same state. And even as I'm writing this, I wish you'd call me and tell me that you screwed up and wanted to start over today, with the lives we're living now, surrounded by these people and these situations instead of those two years ago.

I'm pretty sure I'll see you again down the road. Fate isn't kind enough to me to let me off that easy. I hope it's far enough in the future that we've both found people who make us happy without any complications. I hope we can sit down over a beer and laugh about how silly we used to be.
Posted by BrassyLibrarian at 12:08 AM